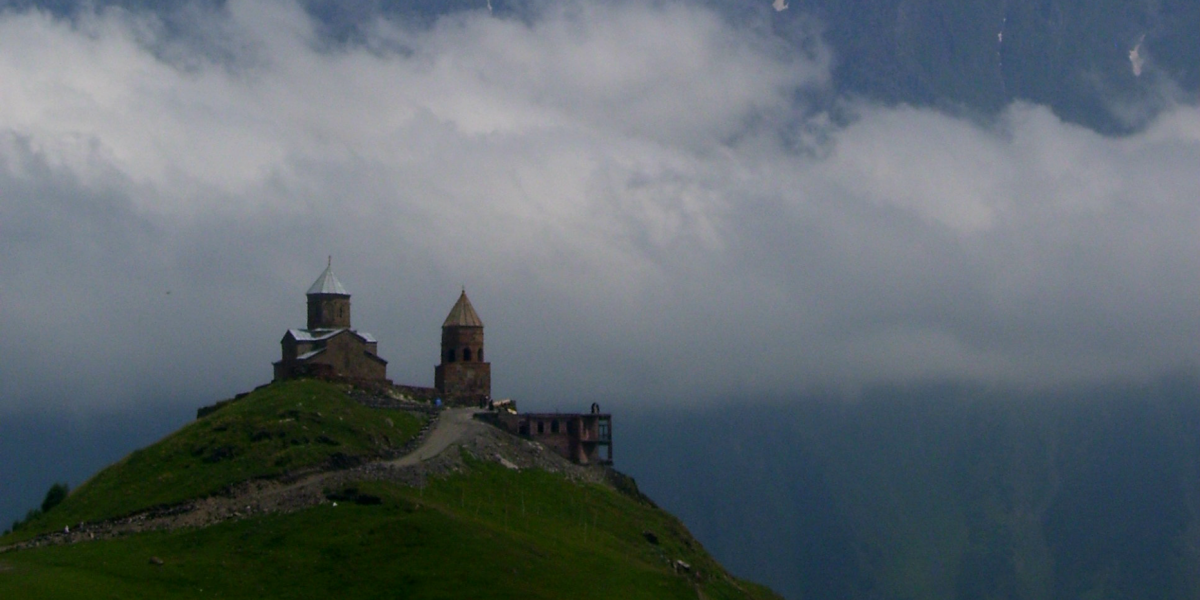 Unique complex and archeological site of Gremi is located in the east Georgia, Kakheti region, Kvareli municipality. The monument dates back to the XV century and was the capital of Kakheti kingdom from the XV till the XVII century. Once the richest city located on the silk-road had strong cultural and trading relations with eastern and western countries. The city was established by Georgian king George VIII in the XV century and flourished during the reign of King Levan in the XVI century.
Life in Gremi lasted for 150 years. Constant Iranian invasions weakened the city and in the beginning of the XVII century it was finally destroyed.
Gremi complex consists of the citadel XV-XVI cc, church of archangels XVI c, secret tunnel, royal residence, trading stalls, bath houses and etc.

Alaverdi monastery is one of the highlights of Georgian culture of the XI century. It is located in eastern part of Georgia, Kakheti region, Akhmeta municipality. Originally was built in the VI century by one of the thirteen Assyrian fathers Josef Alaverdeli on the spot of the Moon temple. Alaverdi became the cultural-educational center of Georgia. In the XI century extent Cathedral was built by king Kvirike. and was destroyed and restored several times through centuries. Cathedral is the burial ground of Kakheti kings. Monastery complex consists of Cathedral, king’s palace, old bath houses, monk cells and recently rehabilitated wine cellar, which is famous for monk-made unique sorts of wine.

Nekresi monastery is one of the main sites in Georgia.It is situated in Kakheti region,Kvareli municipality. There was an ancient city of fire-worshipers in this location Established by King Parnajom in the II-I cc BC. First small Christian church was built here in the IV c. Monastery life in Nekresi started in the VI century with the leadership of one of the thirteen Assyrian fathers Abibos Nekreseli. It grew into the strong cultural-educational Episcopal center. Several buildings are assembled in Nekresi: The oldest church dates back to the IV c. the main Basilica church from the VI c, which was established by Abibos Nekreseli. Third domed church from the VIII-IX cc, wall,tower,Bell-tower, refectory, monk cells and wine cellar. Unique paintings of Nekresi church are partly preserved, but damaged.
Nekresi monastery was invaded several times. It keeps many legends and is the only church in Georgia where pigs are sacrificed.

Bodbe monastery is one of the most important highlights of Georgian culture. It is located in Kakheti, Sighnaghi municipality. Bodbe is the burial site of St. Nino, enlightener of Georgian people.
Historically Bodbe was the cultural-educational Episcopal center of Georgia. In the XV century kings of Kakheti were crowned in Bodbe. In the XVII-XVIII cc it was the strong Episcopal center. In the end of the XIX century nunnery was established here, which was closed down during the Soviet time. Since 1991 monastery is functional.
Bodbe nunnery of St. Nino consists of Basilica church of St. George (XVII c), cross-domed church of St. Nino (XXI c) and nun cells. Beautiful garden surrounds the complex. From the monastery path leads down to the miracle-maker healer spring created by St. Nino. This spring attracts pilgrims from different parts of the world.

Ananuri castle is located in east Georgia, Mtkheta-Mtianeti municipality on the right bank of river Aragvi. It is the unique complex of consisting of different buildings from different periods and the summer residence of Georgian noble family Aragvis eristavi. The rulers of Ananuri castle and the castle itself played a big role in the Georgia’s history.
Compex consists of the wall (XVII c), towers (XV-XVII cc), Ghvtaeba church (XVI c), virgin Marry church (XVII c), bell-tower (XVII c), Khvsurian tower from the XIV c,secular buidings, water reservoirs and secret tunnel leading to the river Aragvi.
Many interesting historical events and legends are connected with Ananuri castle.

Gergeti Sameba(Holy trinity) is the outstanding monument of Georgia. It is located in Mtskheta-Mtianeti, Kazbegi region at the altitude of 2170 m high above se level. This amazing cross-domed church stands on the hilltop, faces the Glacier Mkinvartsveri(5047 m) and overlooks the settlement of Kazbegi surrounded with mountain picks.
Gegreti Sameba was built in the XIV century and was the protector of Georgian treasury for many centuries. Bell-tower next to the Church dates back to the XVI century. At present it is functional monastery and the must-see cultural monument of Georgia.

Bolnisi Sioni of Virgin Marry is located in the southern part of Georgia, Kvemo Kartli, Bolisi region.It was built in the V century and is one of the oldest churches. The church belongs to three nave Bsilica architectural style. Facades are decorated with unique symbolic ornaments characteristic to Georgian architecture and the oldest pattern of Georgian Asomtavruli alphabet is preserved on the northern entrance dated 478-493 AD. Bolisi Sioni is surrounded with a massive wall and there is a three storied bell tower dating to the XVII century. Church was restored several times after Persian attack in the XVII century. At present it’s a functional nunnery.

So called mother language of Georgian central-domed architectural style, Samtavisi is located in the east Georgia, middle Kartli, namely in Kaspi region. It was the Episcopal center established by one of the thirteen Assyrian fathers Isidore Samtavneli. It was one of the oldest religious-educational centers in Georgia.
Present day church dates back to the early XI century and is an example of the first central-domed church in Georgia. Facades are decorated with different ornaments and writings telling the history of the church. Beautiful frescoes are preserved inside the church as well. In the XV century Samtavisi was heavily damaged of invasions and was restored in the XVII c. Bell-tower and the walls are from the later period XVII- XVIII cc. There is an Episcopal palace ruins on the territory of Samtavisi complex.

Kintsvisi monastery complex is located in the east Georgia, namely in Kareli region. It was built at the turn of XII-XIII cc and is one of the splendid architectural-cultural monuments of Georgia.Complex consists of central-domed church of St. Nickolas(XII-XIIIcc), Virgin Marry hall type church (XII-XIIIcc), small hall type church of late medieval period, bell-tower and a wall. Paintings in the churches date back to the XII-XIII cc. In St. Nickolas church are preserved phenomenal frescoes of the prominent Georgian kings George III, his daughter Queen(king) Tamar and her son Lasha-Giorgi. These frescoes are masterpieces of great importance for Georgian people, because they are contemporary of Queen Tamar.

As the symbol of United Georgian kingdom, Bagrati Cathedral is the UNESCO world heritage site, built in the XI c by king Bagrat III. It is located on the hilltop of Uqimerioni mountain in Kutaisi, former capital of Georgia and present day parliament city. This monument captivates from the first sight. Complex consists of Virgin Mary Church, bell tower, ruins of the fortress and a wall from the XI century. Cathedral was heavily damaged several times due to attacks and it stood in ruins for centuries overlooking the city. Despite of the latest restorations in 2010, Bagrati Cathedral remains in the list of world heritage site in danger.

Gelati monastery (UNESCO site since 1994) is the splendid cultural monument located in the west Georgia 12 km away from Kutaisi. This unique complex was built by the prominent king David IV the builder in the XII century and was religious, cultural and educational center of Georgia, including famous Gelati Academy established by David the builder .Complex consists of Virgin Mary church (XII c) decorated with amazing frescoes and mosaic work. St. George church (XIII c) and St.Nickolas church(XIII c), bell-tower (XIII c), academy building ruins, refectory and wall. Gelati monastery is the burial site of the west Georgian kings. David IV the builder was buried in the southern gates of the monastery, where the huge tombstone still keeps inscription of his last will, according to which he wanted Georgian people to step on his heart while entering. Gelati monastery was destroyed and restored several times and at present still is in the list of UNESCO world heritage sites in danger.

Motsameta monastery is located in the west Georgia 6 km away from Kutaisi.The monastery complex id sunk in the ravine of river Tskaltsitela fo amazing beauty. Motsameta is interesting with its history and architecture as well as with the breathtaking panorama.
The monastery was dedicated to the rulers of Argveti brothers David and Constantine Mkheidze, who were tortured by Arabs in the VIII century on the religious ground. Both brothers became martyrs and were canonized. The name “Motsameta” in Georgian means Martyrs’.
In the XI century king Bagrat III rebuilt the ruined church and reburied relics of brothers’ inside. Monastery was restored several times and at present is functional. It consist of the wall, church, bell tower and monk cells.