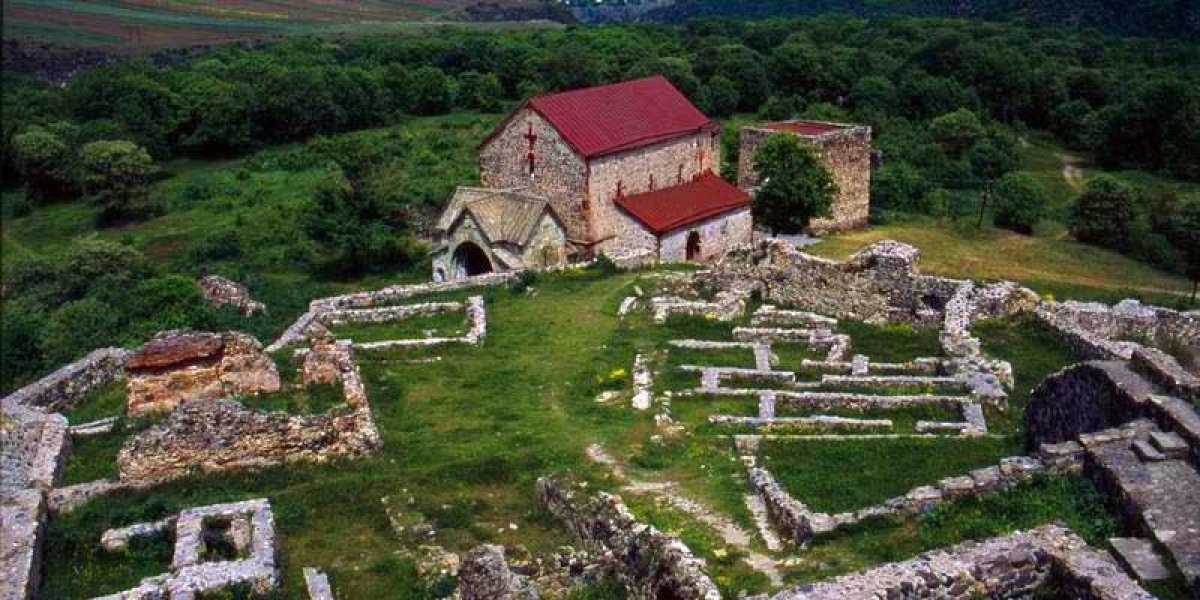 Dmanisi is an ancient city and museum reserve of Georgia.Located in the south-east 80 km away from Tbilisi it is stretched along 13 hectares on a hillock at the confluence of rivers Mashavera and finezauri. 1936-2001 archeological excavation revealed the inhabitance of this city 1.8 million years ago. It is the oldest inhabited area in Europe after Afica. Fossilized Skulls and jaws of the hominids were uncovered and these ancient people were named Homo Georgicus. Restored with wax Mzia(woman) and Zezva(man) are displayed at the local Dmanisi museum .Thousands of stone tools where found with them as well. Hominids body restored with wax are on a display at the local museum.
There are the traces of inhabitance on the territory from almost every period. Especially was densely populated in the bronze age.
In the historical documents Dmanisi is first mentioned in the IX century. It was strategic city fortified with the citadel and secret tunnel. The city had secular, cultural agricultural buildings ,bath-houses and even the mint. Dmanisi Sioni of mother Marry dates back to the XI-XII centuries.
After Timur invasion in the XIV century the city was destroyed and quit existence.
Georgian and foreign archeologists continue working in Dmanisi.

Ancient city of Vani is a museum reserve and archeological site situated in the west Georgia, Imereti region. As well as all the antique cities city of Vani is located on a hillock overlooking Rioni river. Archeological excavations since the XIX century up to the present day is a true evidence of Greek and Roman historians’ notes about Georgia and supposedly it was the centre of Colchian kingdom in the VIII-VII centuries BC.
Ruins of different constructions, palaces, different chapels chiseled out in the rock, rich tombs and other complexes indicate on the wealth and power of the rulers. Archeological items proof that Vani had strong cultural relations with Hellenistic Greece and Rome.
Among amphoras, statues and different thousands of items noteworthy is the collection of  golden decorations (Rings, Diadem’s, templar pendants, necklaces and etc.). Amazing goldsmith work of Colchian origin and style apparently have the influence of Mediterranean and eastern goldsmith techniques.
Once rich and powerful city of Vani was weakened by invasions and lost its meaning as centre in the I century BC.

Ancient city(Archaeopolis in Greek) of Nokalakevi  is one of the most important highlights of Georgian history, located in the west Georgia region Samegrelo, namely in Senaki.Nokalakevi has another name Tsikhegoji(Qujistsikhe), named after Quji Eristavi,the ruler who established the city in the early IV century BC, but archeological findings reveal the inhabitance of the city in the second half of II millennium  and traces of the big settlement in the VIII century BC.
Present day remains of the city are represented by the walls, towers, secret  tunnel, water reservoir, water lines bath houses, chapels, churches and palaces occupying the territory from 17 to 24 hectares.
Tsikhegoji was the capital of Egrisi later Lazika from the III century BC to the VIII century AD and city of great importance in the Colchian kingdom with the advanced metallurgy and crafts. After Arab invasion in the VIII century Tsikhegoji was finally destroyed.
Thousands of archeological items are displayed at the Nokalakevi museum.