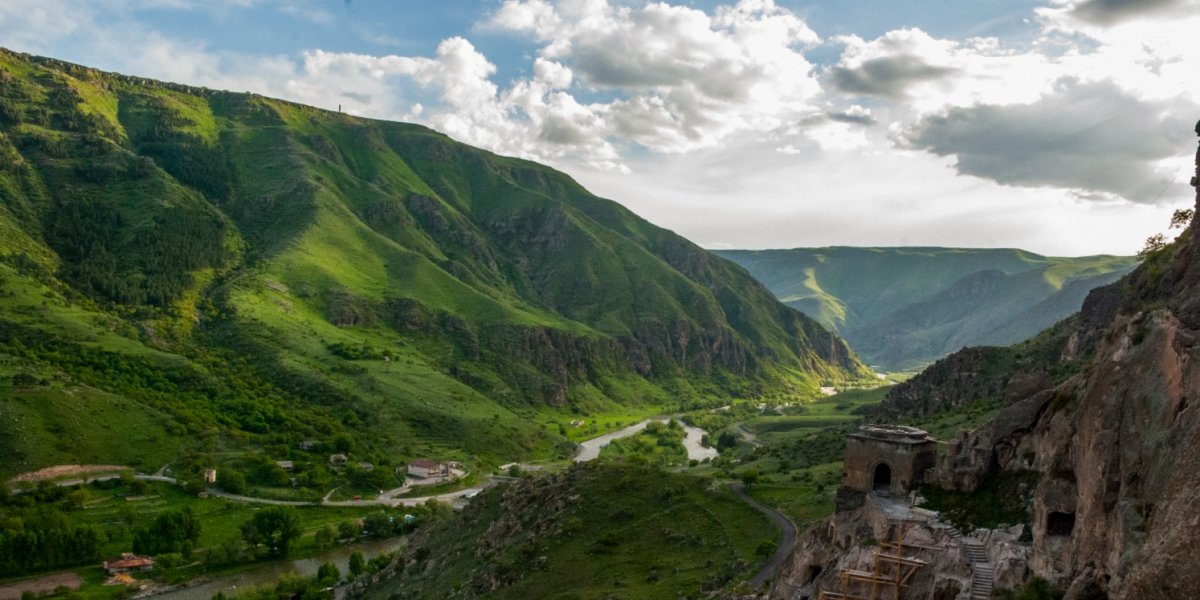 Uplistsikhe is unique manmade cave complex in the east Georgia, in the middle Kartli 15 km away form Gori on the right bank of river Mtkvari. It’s a historical-archeological site and very important antique monument. Uflistsikhe in Georgian means lord’s fortress and was established in the V century BC, but archeological excavations revealed the traces of inhabitance here in the II millennium BC. The cave city is chiseled out in sandstone area of Kvernaki range and consists of several cave complexes including; pagan temple, medieval Christian churche, theaters, halls, wine-press, wine cellar, pharmacy, dwelling caves and even dungeon.
Uflistsikhe was located on the silk-road and had strong cultural and trading relations with different countries. Originally the city was resided by sun-worshipers but after embracing Christian religion it became less inhabited. In the middle ages it was very important strategic fortress in Georgia. First king of United Georgian kingdom Bagrat III was crowned in Uflistsikhe in the end of the X century.

Vardzia cave city is located in the southern part of Georgia, Samtskhe-Javakheti region on the right bank of river Mtkvari.This historical city is astonishing ensemble of caves cut out inside the tuff-stone area of Erusheti range. The caves are located on thirteen tiers and occupy area of 40 000 m².
Vardzia was chiseled out in the XII-XIII cc during the reign of George III and his daughter Queen (king) Tamar. It was strategic cave city consisting of hundreds of caves with the capacity of 50 thousand people. As a well organized city, Vardzia had water supply system, water reservoir and many other caves of different purposes. Noteworthy is the Church of Virgin Marry (XII-XIII cc) in the middle of the city .It amazes visitors with the paintings, especially frescoes of George III, Queen Tamar and her son Lasha-Giorgi. Bell-tower dates back to the XIII century. Rich and powerful city was attacked several times, especially in the XVI century and it was abandoned.Many historical events and legends are connected with Vardzia. Vardzia has been submitted for future inscription on the UNESCO world heritage list.

David Gareji cave complex is located in the south-east of Georgia in Kakheti region, in the semi-dessert area combined with green pastures and Geological layers of amazing beauty. David Gareji is bordered by Azerbaijan.
Monastery complex of Davi Gareji is stretched over 25 km².It was established by one of the thirteen Assyrian fathers David Garejeli in the VI century. He started monastic life with his pupils lukiane and Dodo and established three monasteries on the site.
The number of churches and monasteries increased time after time and monastic life flourished especially in the XI-XIII cc. Monks of David Gareji always were well known as the guardian monks of Georgia, because they could notice enemies on a long distance. It was attacked several times by different invaders but today is a functional monastery.
In some caves of David Gareji there are unique frescoes preserved through centuries, which brings visitors in admiration.
David Gareji has been admitted for future inscription on the UNESCO world heritage site.